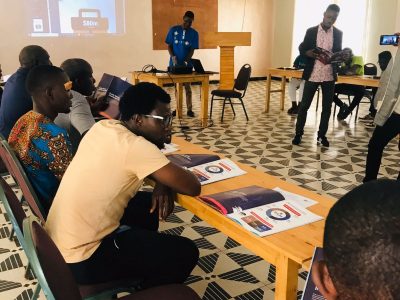 Photo of participants During the group work Session

BudgIT-Liberia Under her Budget Access Project Phase I implementation brought together over twenty (20) active civil society organizations to participate in a one day town hall meeting about the 2022 approved national budget. The country’s national financial instrument has over the years been crafted in with a volume of over 500 to 600 pages making it difficult for people to understand and understand the budget line by line and columns.

Explaining the overview of the project, Mr. Abraham Varney who is the country representative of BudgIT-Liberia said, the project is supported by the National Endowment for Democracy (NED) to educate people about the national budget.
At the start of the one day town hall meeting which was held at Passion Hotel, participants were asked about their understanding of the national budget and their political or civil engagements with their leaders. The intent of the meeting was to enlighten citizens about how funds are generated and expanded of which most of the money goes to recurrent expenditure that overweighs Public Sector Investment Plans (PSIP).

Many of the participants did not understand how the national budget works in terms of revenue collection and expenditure and could not consume or understand the entire 500 to 600 page documents especially where most of who are not financial expects.
About 15 civil society organizations inclusive of the media were officially invited but the meeting brought together over 25 representatives from across Bong County to sit and learn about the 2022 reproved national budget.

The 2022 approved national budget was simplified into simple to read tools in graphics formats. Different sections were conducted including understanding the formulation of the budget, the approved 2022 national budget that included questions and answers.

The questing about what were their understandings of the national budget;
Most of the participants knew the budget to be the “Projection of document that is been crafted for developmental initiatives for various ministries and agencies of government and is not a physical cash sitting somewhere where for government to used rather they get them through taxes, grants and loans”
Some have never seen or read some of the figures allotted to top government officials in public services like the president, vice president, speaker, senate protemp, deputy speaker and other sectors.

Group Photo of participants and facilitators
The meeting was interactive with more questions than answers and key recommendations.
Some of their recommendations were;
1. BudgIT-Liberia should make the engagement a continual process to conduct training of trainer’s workshop for civil society organisations in their implementing counties so that they also can to the message to the locals to understand how the budgeting system of the Liberia works.
2. To closely work with other community based organisations in achieving the project’s goals.
3. To have a base in the county that will directly report to head office on the many issues in the county.
4. TRACKA should be introduce in the counties to put government officials feet to the fire
5. To not only sit on the radio with the education but, rather move from town to villages to educate the people on how they can engage their leaders about the budget of the country
6. To have a face-to-face interaction between citizens and lawmakers and their citizens to explain how the budget is be crafted and formulated.
7. To ask lawmakers why the necessary ministries to invest in have been downplay but spending over nine (9) millions on the president’s county tour while the ministry of agriculture gets 1 million for public sector investment plans for a period of 12 months.

The town hall meeting was scheduled to last for at least 2 hours 30 minutes but was pushed to more than 3 hours due the heated debates about how the budget is been formulated and expanded.
Though it seems a little difficult to get government officials to these kinds of events to explain the budget to their people, but BudgIT Liberia has made it part of her plans for the next meeting to have some of the district lawmakers involved.